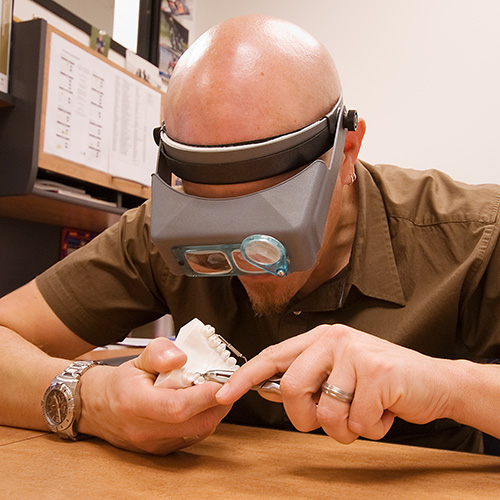 Aaron is a Senior Project Mechanical Engineer at Ortho Organizers, and yes those are teeth in his hands. Normally you can see his face, but it's not uncommon to see him tinkering with stuff looking like this. We work with really small stuff at Ortho Organizers (orthodontic appliances), so Aaron occasionally sports his zoom goggles to keep the strain off his eyes.

When he doesn't look like a mad scientist, he actually looks like a bouncer or a hitman or some other “tough-guy” role. He's pretty big and he could probably intimidate most people without even trying, but he's actually super nice. He also rides street bikes, so he is kind of a biker (but not the Harley type).

Aaron actually turned me on to the idea of going up to Palomar Mountain to shoot the riders as they take on South Grade Road — a place Aaron used to ride until he took a spill. It's a pretty famous road for sport bikes and cars, so I might head up there one weekend and shoot some action.