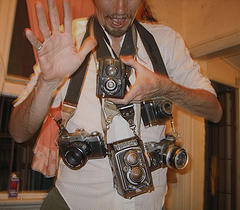 This is a re-run of the first reader poll that I ran back in May. I think this is a good question to come back to from time to time because as more readers come on-board, the needs of the group may change. The results from last time showed that a huge majority of the readers are dSLR users, so I've continued to post articles that are directed toward that type of photographer.

So let's vote again, and see where we stand over six months later. Maybe most of us are still dSLR users, but maybe not. For those of you who use several types of cameras, vote for the one that you use most often.

And based on the results from last week's poll (What Type of Photography Do You Fear Most?), it would appear that most of us are scared of people. Some are scared of kids, some of weddings, a few are scared of nudes, and others are scared of models — but a vast majority of the votes went to portrait photography. Well… it looks like Trevor picked the right topic for the December Challenge.