Here's another “Edit My Photo” project entry, this time from Libeco. This is now the 6th official entry into the project, so the top spaces are going quick. This, along with the other entries can be seen at the temporary project results page. So here it is, and here's how it was done: 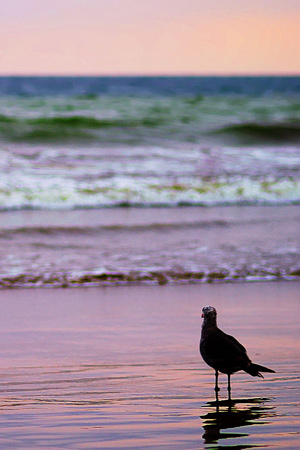 I started by opening the picture in Adobe Camera RAW and applied these settings: Exposure: -1.30, shadows: 1, Brightness: +116, Contrast +82, Saturation: +69. After that I straightened the horizon with the help of the measure tool and rotate canvas -> arbitrary. Then I cropped the picture to a portrait layout.

Finally I copied the background layer and applied the unsharp mask with an amount of around 150%, a radius of 2.7 pixels and a standard threshold of 0. Then I masked out the edges of the bird just a little bit with a small brush and low opacity. I copied that layer and masked out everything but the sky and a part of the water. Next I used the plugin noiseware to remove the noise (full noise reduction setting), which also blurred everything a little.