Here's a photo from my trip to Belgium this last spring. I took this shot from the Grand Place looking up at the town hall building. It was dark and I didn't have my tripod, so I cranked the camera up to ISO1600, opened up the aperture, and got on one knee in attempts to stabilize myself. The camera metered at 1/10th of a second, which is ridiculously long for shooting handheld, but the shot turned out OK anyways. I still wish I had my tripod — not sure when I'll be back out that way.

This photo started off a little different than most of my others. Sometimes I do a quick evaluation with the JPEG images just to see what different things will look like. If I see potential, I pop open the RAW and go from there. I really liked how this one would look as a black & white, so I opened up the RAW to start processing. I found that I couldn't get the same gritty look and feel from the RAW file as I had with the JPEG. So rather than fight it, I just started editing off of the JPEG.

The original JPEG (1) actually looked pretty decent, but I started things off with a small curves adjustment (2) to bring up the highlights. Then I did the black & white conversion (3) using the CS3 Black & White adjustment layer at 4% red, -36% yellow, -29% green, 105% cyan, 213% blue, and 194% magenta. These settings really darkened the building and brightened the sky. This also introduced a lot of visible noise into the sky because I amplified the blue channel, which is typically very noisy on digital cameras. After this, I made a lot of little changes including a curves adjustment (4), selective burning (5) in the sky, selective dodging (6) in the sky, a color burn layer blend (7) at 100% opacity and 5% fill, and a screen layer blend (8) at 100% opacity and 12% fill. Each step along the way produced small tweaks to the tone and contrast. No sharpening on this one because it made it look weird. 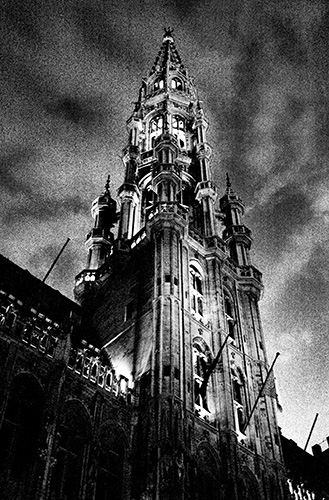