This one was from my last trip to the Delaware Water Gap here in New Jersey. It was spring time, so the creeks were teaming with new growth and bright colors. I found this little pool along one of the creeks, and it really caught my attention. I was packing a tripod, so I set up and took a handful of shots at different focal lengths, shutter speeds, and with different lenses. Out of all the shots, I liked the composition and sense of motion in this one the best, so I finally went ahead and post processed it. It's a little cluttered, but there's still something I like about it… I'm just not exactly sure what it is.

The JPEG (1) of this shot looked alright, but the tonal range just wasn't there for as much contrast the scene had. The processed RAW file (2) looked a little better to me, plus I adjusted the temperature to make it a little warmer. After that, I dove right into the first curves adjustment (3) to brighten everything up while masking the highlights to keep them from getting any brighter than they already were. I did another curves adjustment (4) to darken the highlights by masking out the entire adjustment layer and poking holes in the areas of highlight. This helped to bring the overall contrast of the photo down to a reasonable level so it wasn't so distracting due to the sunny spots in the scene. Then I did another curves adjustment (5) to brighten a few key elements of the photo: parts of the water, the walls of the pool, and a few of the mossy areas. This gave me some contrast where I wanted it, so that certain parts of the image would stand out more than others. At this point the photo looked OK to me, but I wasn't satisfied with the overall look. So I applied a Color Burn Layer Blend (6) with a duplicate merged layer at 100% opacity and 29% fill. This really boosted the contrast and color in the entire image, and kind of gave it a strange feel. I sat on the results for a couple of weeks, but I decided to keep what I had done when I came back to it. The last step was some sharpening with the Unsharp Mask (7) at an amount of 93%, a radius of 2.8 pixels, and a threshold of 4 levels. 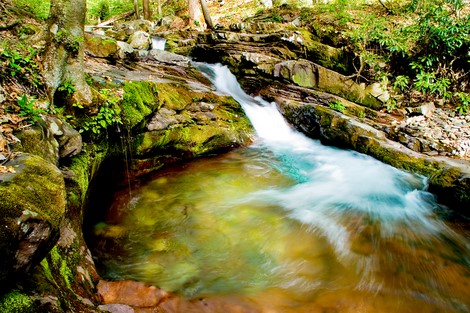