Most of you seemed to find my “Equipment Options for Macro Photography” fairly useful, so I thought I’d follow it up with some more macro equipment. Last time I focused on the lens options — so this time I’ll focus on all the other stuff that’s also used in macro work. Basically, I’m talking about anything that doesn’t attach to the front of the camera body, so these are things that can be used for any type of camera. 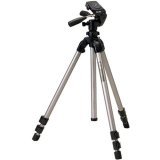 Camera shake is more prone to occur while shooting macro, due to the high magnification levels. A tripod is the best way to battle shake issues — and a good tripod is almost critical. Look for something sturdy enough to hold up during a breezy day, and something flexible enough to get into tight spots. In macro, you’re working up-close so it’s nice to have a tripod with independent leg angles and lengths. Also look for a tripod that can get real low and/or invert the center column to get right on the ground. The tripod in the picture is the Slik Pro 700DX tripod with independent legs that are adjustable to 3 different angles. The center column is two pieces and it can be inverted, so it can reach really high and and really low. I chose to buy one of these mainly because of their rigidity and sturdiness. It’s practically indestructible.

Almost any good tripod head will do fine for macro work, just as long as it’s sturdy and predictable. The slightest movement in the head can cause your entire macro composition to be thrown out of whack. Leveling indicators are nice to have, but aren’t completely necessary in most macro work. If you’re concerned about being level, look for a head with two tubular levels rather than a bull’s eye level (though most ballheads have a bull’s eye). The tripod head in the picture is a Slik AF2100 Pistol Grip Ballhead. I picked up one of these when I bought my tripod, and I absolutely love using it. It’s very sturdy while locked, and very easy to operate when released. I like using this head because I can aim and lock the camera with one hand while I manually focus with the other hand.

Often times when shooting macro photos, you focus the image by moving the camera rather than using the focusing ring on the lens. On a macro lens, the focusing ring changes the amount of magnification, and thus the composition of the subject. Macro shots also have a very small depth of field (unless you stop the lens WAY down), so the slightest movement can throw the image out of focus. A macro focusing rail (or slider rail) sits between your tripod head and your camera, and acts as a precision moving platform for your camera. You can find them in single-axis or double-axis (as shown in the picture) models. I don’t have one of these yet, but it’s probably my next piece of macro equipment I’ll buy.

Sometimes tripods just can’t get you where you need to be — like on the ground. A beanbag is a good way to stabilize your camera on top of other objects or the ground. The nice thing about these tools is that they conform to the camera resting place and the camera so you don’t have to worry about your camera falling off of something or getting dirty or wet from the ground. Most of them are small enough to fit in your camera bag, and they typically don’t weigh much. I keep meaning to pick one up, but it keeps evading me. At around $10, it’s hardly worth NOT getting one. 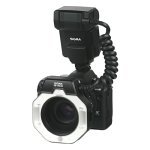 When shooting at close distances less than one or two feet, a traditional flash just won’t work. You end up with half-covered lighting, shading from the lens, and harsh directional lighting. A ring flash mounts to the front of the lens and directs light straight at your subject. Some ring flashes even have the capability to turn down or turn off certain sections of the ring in order to give slightly directional lighting for higher impact. Ring flashes can also be used in non-macro photography, and I’ve often heard of them being used for portrait work in conjunction with other studio lights. I don’t have one of these either, but it’s next on the list after the slider rail. The downside to these flash units is that they cost just as much as a traditional flash.

If you can’t afford a ring flash right now, a small reflector might be a good thing to have handy. A reflector can be placed near the subject to redirect available light. You can find these in all different sizes and colors, but for macro work you really shouldn’t need anything bigger than 24 inches in diameter. Most of the reflectors you find will fold down to about 1/3 of their expanded size, making them easy to pack in your camera bag. Again, this is one of those things that I keep saying I’ll pick up, but I keep forgetting. They’re a handy all-around tool to have in your bag.

When working near, or on the ground, it’s really hard to see through your viewfinder. On SLR cameras, that’s the only way to see your subject since most don’t have a live LCD display (it’s that darned mirror that gets in the way). Fortunately you can attach a right angle viewfinder to the camera’s existing viewfinder so you can look straight down into the camera rather than straight through it. The one I’ve shown in the picture is purely optical, but there are digital models that have a flip-out LCD screen that shows what’s in the viewfinder.

Even when using a tripod or beanbag, your camera is susceptible to shake and blur. At a very minimum, you should use the short time-delay function on the camera to lock the mirror prior to taking the picture. That can get to be tedious sometimes, especially when you just want to take some shots! A shutter release cable allows you to trigger the shutter without touching the camera. This helps prevent camera shake and it also prevents the tripod head from shifting when pressing the button on the camera.

Macro photography can be very straining on your eyes and body. Long periods of staring through the viewfinder at strange angles and positions will really drain you. You’re looking for that fine line between in-focus and out-of-focus, you’re making dozens of tiny little adjustments to get the composition right, and you’re usually not sitting comfortably in your recliner while doing these things. It’s probably a good idea to carry some head medicine and pain killers in your bag to keep your stamina up during your day of shooting.

So these are some of the common items found in a macro photographer’s bag, but I’m sure there are a few other obscure pieces of equipment I’ve missed. The thing about these tools is that most of them can be used for other forms of photography, so if you decide to buy them you’ll probably be using them more often than you think.

Did I miss any major items? What other tools do you use for macro work?