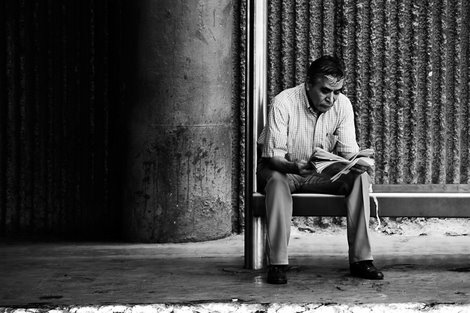 I had the awesome opportunity on Friday to get out into Moneterrey and take some photos. I'm not sure exactly where I was in the city, but there was certainly lots to see and do. The Friday morning weather was looking a little risky, but things cleared up in the afternoon — so I didn't have to worry about the rain. The heat and humidity was enough to make me wish it was raining though!

I decided prior to going out that I would make an effort to focus on people photography. It's not my strong point, so I thought it would be a good growth opportunity on my part. I still took the tourist photos of the statues, buildings, churches, and such (why not, I'm a tourist). I really started taking more people shots as I made my way into a “walking only” area of town that was filled with little shops and street vendors.

The big photo at top was one that just happened to catch my eye as I walked down the street. This man was sitting on a bus stop bench located across the street from me. The bench was also located under an overpass, so the lighting was nice and soft. I had to wait a few moments for some cars to pass between us and for the other pedestrians to exit the frame. He never did see me standing across the street pointing the camera at him, so the photo turned out much more natural.

This “Salsa Man” photo actually has a bit of a story behind it. This man was set up on a street corner, selling bottles of salsa. As I walked closer, I thought that it would make for a decent photo. I was already too close for a candid shot, so I decided to ask for a photo. This was an interesting conversation since he didn't speak any English and I don't speak any Spanish. Amazingly enough, I managed to ask him if I could take his photo and he agreed. After the fact, he grabbed a bottle of salsa and put it in my hand. I figured “why not” and I asked him how much (again without any Spanish). He wouldn't take my money! He was actually pushing me down the street smiling, laughing, and talking away in Spanish. Eventually I got him to take a few bucks in exchange for the salsa. The whole situation took me by surprise!

So I managed to get some people shots in Monterrey, Mexico. They may not be the best people shots ever taken, but they are a good reminder of my trip into town. For me, they capture a little bit of the culture south of the border. If you ever have the chance to visit Monterrey (or any part of Mexico), do it without hesitation. It's a very unique place, filled with interesting bits of culture and dynamics. My Mexican experiences have been limited to Juarez and Monterrey, but I hope to see more of the country someday.