We had a little bit of a storm roll through North Idaho last night, so naturally my Dad and I got out on the front porch to try for some lightning shots. I really haven't done any lightning photography with my dSLR, so I was pretty much winging it. The lightning passed too quickly to get any good shots, but I did learn a few things about lightning photography. 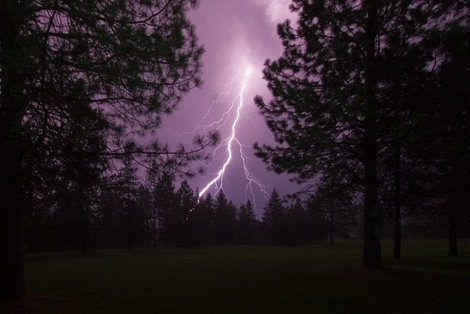 The first thing I learned was that your choice of lens is relatively important. I had my 10-20mm zoom on the camera, but it felt a little too wide for the scene I was shooting. I tried a few with my 105mm macro, but that felt a little too narrow. I would think that something around 35mm to 70mm would work well for most situations, though some scenes might work better with lenses below 35mm. The important thing is that you want to catch a big enough portion of the sky without going so wide that the lightning becomes a minor part of the photo.

Another important part of lightning photography is your choice of shutter speed and f-number. I was shooting 30 second exposures, but I might have gone as long as two or three minutes if I had a shutter release cable. 30 seconds wasn't bad though, and it would work well if the lightning storm was fairly active. The other side to exposure is the choice of f-number. I tried a few different settings, but I seemed to get better results right around f/11. When I tried f/5.6 I ended up with an overexposed sky, and when I tried f/22 I ended up with dark skies and really weak bolts.

So next time I go out for lightning shots I'll be using my 18-200mm zoom at 30+ second exposures around f/11. Maybe next time I'll get a few keepers. The photo at the top of this post is the only one that was even worth working on, though it needed a lot of work (you can see the original here). The funny thing is that it was also my first shot taken — I basically spent the next half hour getting bad shots and learning how not to take lightning photos. By the time I started to figure it out, the storm was too far gone to get any more photos. Next time I suppose…