Critiquing the photos of others can be difficult, but critiquing your own work is downright near-impossible. It's easy to point out the good points of a photo you've taken, but the bad points are another story — especially if it's a photo you really like.

Mike Brown at “Macro Art In Nature” is asking us to do just that — pick your best photo (flora/foliage closeup) and self critique it. He's turned this into a group project that he coined “The Self Critique Project”. If you're interested in participating, head over there and read the rules.

At first, I thought it would be no problem picking out one photo and critiquing it. I've spent the last several days going back and forth between 2 or 3 photos, unable to pick what I consider the best. It's a very hard thing to do. Nevertheless, I've managed to choose just one. On with the critique… 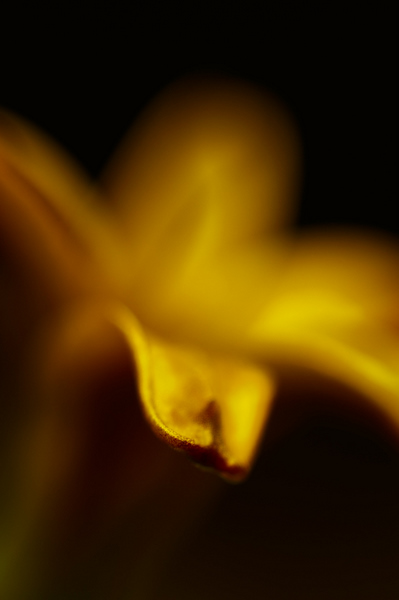 There are several things I like about this photo, but the strongest point is the color. Originally, it was a purple flower and I accidentally turned it gold during post-processing (click here to see how). I don't know why I like the color so much, it just has the look and feel of fire to me. Another thing I like about the photo is the shallow depth of field and the location of the focal plane. At a glance, the photo looks very abstract with most of it being out of focus and very soft — except for the very tip of the nearest petal, which is quite sharp. The last major strong point in the photo is the shapes formed by the highlights and shadows within the flower itself. Though most of the photo is quite out of focus, there are a handful of tonal trails and geometries living in the sea of golden color.

Of course I have a bunch of little things I like about the photo, but it's hard to describe them without pointing at the photo. Even if I point, I have a hard time placing words to some of these things.

I had a hard enough time describing what I like about the photo — this is going to be rough. I guess there are a couple of things that just don't sit well with me on this photo. One of them is the point of focus. I said I liked how it turned out, but I think I'd be happier with a little more sharpness on the tip of that petal. The right side of it is slightly out of focus, and I think it would be a stronger photo if the entire tip was sharp as it trailed off to blurriness in the background. The other thing that doesn't sit well with me is the overall composition — but I can't figure out what it is that's bothering me. I thought it might look better if the entire flower was shifted upward in the frame, but I tried that in Photoshop and I didn't like it. Maybe a shift to the left or right… I don't know. Or maybe it's missing something in the frame; like something to fill in some of the blackness — maybe some texture or something… again, I don't know. These are the things that don't quite sit well with me, but I can't put my finger on the exact problem.

Part of Mike's project involves deciding if you're open to the critique of others. Typically I don't invite the masses to critique my work, because I end up getting a lot of technical advice on an artistic piece from people who missed the point of the photo entirely. Don't get me wrong, I don't mind comments and critiques from other photographers with whom I have some sort of relationship — I just don't care for the 30 second photo-bash from somebody who didn't take the time to digest the photo.

That said, I'm going to break stride and declare this photo available for open critique — even if I have no idea who you are, and even if it's a 30 second photo-bash. Now go on, tell me what you really think about it — no hard feelings, I swear.