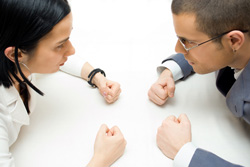 Go to any photography forum or discussion group, and you'll ultimately end up finding a heated discussion on some silly topic. I don't know if it never gets old, or if there are just a lot of new photographers who haven't had the opportunity to participate in these discussions. Either way, it's almost nonstop. I've even seen a few forums that have banned certain discussions because people take it too far.

Here are a few of my favorite pointless discussions complete with my own snide remarks. I try not to take sides in these types of discussions, because it's just too much effort for what it's worth.

It's called personal preference! One is not better than the other! Each has it's own strong points and weak points, and I know a lot of photographers who shoot both. I don't shoot film (never have), but I'm guessing that if I had started in photography 10 years prior I'd be shooting both.

Seriously people — they both suck. Get on with your lives and go take some pictures. Just kidding, I love the Canonites and Nikonians. Though it's curious why they're the only two groups that have named themselves as if they were residents of a small country. As with film and digital, each has it's strong points and weak points. I've seen amazing photos from both brands, so there must not be a huge difference. I shoot Konica Minolta, so I'm a bit of an outsider on this one.

What Camera Should I Buy?

When you ask this question, you open up the previous two discussions by default — don't do it! I've seen this question asked about 1000 times by unknowing photographers — though it's an honest mistake. 98% of photographers who answer this question will give you a recommendation for the model or brand of camera they currently use or have previously used. You just end up with two dozen recommendations and an argument over Canon VS Nikon.

Stop whining about microstocks! It's not the end of the world! If a stock photographer can't beat the microstocks, maybe it's time to move on. They're different markets too (mostly). I tried the microstocks a while back, didn't like it, and moved on to something else. Now I actually buy from them occasionally when I need an image for the blog (I paid $1 for the image in this post). If I had to pay a couple hundred dollars for a stock photo, I wouldn't buy any. Bigger companies that have more money than I do, however, know the value of a traditional stock agency and are willing to pay for it.

So go ahead, tell me why I'm wrong and you're right on these issues — I'm interested to hear it.

Also, what are your favorite pointless discussions in photography?