New Jersey is a funny place when it comes to flooding rivers. It doesn't take much rain to make every river flood over at least a little bit. The day I took this photo was immediately after more than a little bit of rain though — it was a serious downpour. Every road and bridge even close to a river was flooded out, but I managed to find one that was still accessible. I took this photo while standing on a bridge overlooking the flood plain. I used my wide angle zoom lens set at 10mm to get more of the water in the shot, plus it makes it look a little more expansive than it really is. To give you an idea of just how flooded things were, the river (about 40 feet wide) typically flows to the right of the trees in the center of the frame. Everything to the left of the trees sits about 4 to 5 feet higher than the river, and it's typically used as a horse pasture. Also, the river was flooded further off to the right of the frame by about another 100 feet. It was a big rain.

The JPEG (1) turned out a bit dark, but at least the shadows weren't clipped. A little tweaking in ACR, and the RAW file output (2) looked pretty good for starters. Before I did any further editing, I made a mask to separate the sky from the rest of the image so I could adjust each independently. Then I applied a curves adjustment to everything but the sky to brighten it up (3) by pulling the middle of the RGB curve up and to the left. The sky got a levels adjustment (4) with a black point of 71 and a white point of 250, and a curves adjustment (5) by pulling the middle of the RGB curve down and to the right for more darkening. At this point, I fiddled around with the image for quite some time to try to make something more of it — I just wasn't impressed. I remembered a tutorial at the Digital Photography School called “How to Make Digital Photos Look Like Lomo Photography” — so I thought I'd give it a try. To start, I applied a serious curves adjustment layer with a strong “S” curve to really increase the contrast (6). Then I created a new layer on top of the stack, filled it with black, and set the blending mode to “hue” at 40% fill (7). The last step consisted of applying the unsharp mask (8) at an amount of 50%, a radius of 50 pixels, and a threshold of 0. 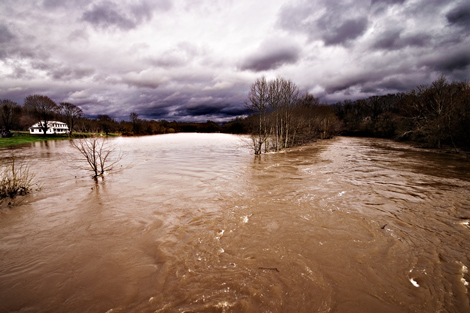