Another one of my shots from my short trip to Europe. This one was taken in Brussels, Belgium at the “Grand Place”, which is kind of the central market square. It was late and the sun had set, but there was a little bit of light left in the sky. I had to shoot at ISO 1600 and a wide open aperture just to get the shot off. Even then, I could only get the shutter speed down to 1/15 seconds. I shot handheld, but I got down on one knee and rested my elbow on the other knee. I also shot at the shortest focal length to help hide any camera shake. All in all, it turned out okay. But it would have been really really nice to have a tripod with me.

The JPEG of this photo (1) wasn't too bad, but it was a little clipped on both ends of the histogram and it seemed over saturated too. The RAW conversion (2) had a better dynamic range and the colors weren't as overbearing. The color still didn't thrill me, so I went black & white (3) with the Adobe Photoshop CS3 black & white adjustment layer set to 168% red, 10% yellow, -23% green, 300% cyan, -48% blue, and 123% magenta. This gave pretty good contrast in the sky and in the building. Then I did an initial curves adjustment layer (4) with an “S” curve to increase the contrast. I did a little bit of masking by hand to get the clouds looking better here too. Then I did another curves adjustment layer (5) to bring the midtones up a bit for more contrast — and again more masking by hand. The last step was a sharpening (6) with the unsharp mask. This actually made the sky much grainier than it had looked before, but I liked it so I left it in. 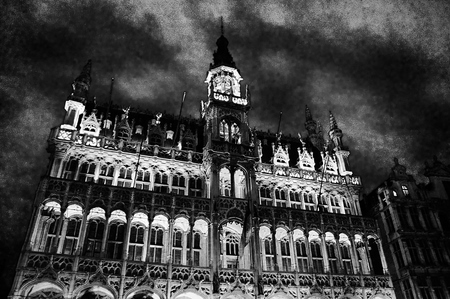