This was another building from my last trip to the Princeton Campus here in New Jersey. My Dad and I were doing a little exploring last time he was out for a visit. Some of the buildings there are really something to look at. It's hard to believe that they use these buildings on a regular basis. This one had kind of a stout feeling to it because of the general size of the building. I made it look even bigger by shooting at 18mm with my 18-200mm lens. It has barrel distortion at the low end so it causes the buildings verticals to converge from the perspective I was shooting at. Some people will say that's unprofessional, but I think it adds character is certain cases. I framed the shot with the branches from nearby trees, trying not to let them overlap too much of the building.

The JPEG (1) on this looked okay, but the overall colors of the building and sky were just too bland for me. When I processed the RAW file (2), I actually kept the color saturation down because I knew I would be converting to black & white and I didn't want to introduce any additional color noise or artifacts. To convert to black and white (3), I used the Photoshop CS2 channel mixer at 0% red, 0% green, and 100% blue — basically just the blue channel. Then I had to create a mask to separate the sky from the building and branches so I could adjust each separately. Once I had my mask I applied it to a levels adjustment layer for the building (4) and boosted the contrast by bringing the white point down to 137 and bringing the black point up to 55, which clipped some of the shadows. I used the same mask to apply a curves adjustment layer to the building (5) with a moderate “S” curve to separate the tones a little better. The building was looking pretty good, so I went to work on the sky. I inverted the layer mask from the previous steps and applied it to a levels adjustment (6) in which I brought the black point up to 223 and I left the white at 255. There was almost no detail left in the sky, but I managed to pull a little bit of a gradient out of it. I wanted to add a little more darkness to it so I added a layer of vignetting (7). The last step was a tiny amount of sharpening (8). 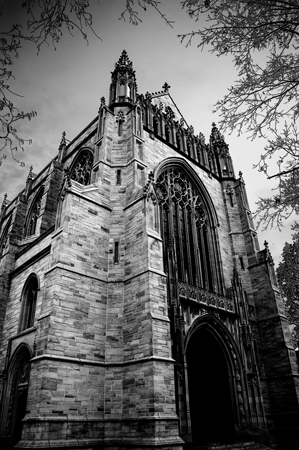