Here's another photo taken from a moving boat. I seem to have a bad habit for doing that. This one was taken on one of the Liberty Island Ferries as we left the island to go back to Liberty State Park. It was a good thing I had a zoom lens, because I wouldn't have been able to frame the shot so well without it. I didn't have much time to think about this one because the boat was moving off to the right of the frame and I would soon lose the sun over the island composition. I zoomed to fit the width of the island and aimed to set the vertical center right between the sun and the horizon. I didn't want the water to be too overpowering, but I didn't want all sky either. I took three shots. The first one had the sun right over the flag and the third one had the sun off the island. Number two turned out just where I wanted it. I was actually surprised the shot turned out so well shooting directly into the sun — no spots or flares.

My Dad might come around trying to claim credit for the shot because he thought it was all his idea. So if you see some crazy guy commenting about it, you'll all know why. He's just mad that his battery died 2 seconds prior as he was framing the shot. Too bad buck-o! I win!

The editing on this photo was very minimal, with mostly color adjustments. The JPEG (1) turned out a little too bright for my taste — good thing I shoot RAW too. After processing the RAW image (2) through ACR for temperature and exposure, I had to do a little rotating and cropping. Since I was on a boat, the shot didn't turn out exactly horizontal, so I used the measure tool to lay down a line where I thought the horizon should be, and I let Photoshop calculate how much rotation to apply. Then I had to crop off the extra bits after the rotate. At this stage, I also did a tiny little touchup — there's an airplane making a bit of a vapor trail in the sky, so I cloned it out. I had the color temperature I basically wanted, but it lacked saturation. So rather than increasing the saturation, I went to LAB mode for a little tweaking. I applied a curves adjustment layer while in LAB mode, and made adjustments to each channel individually (3). I'll have to write about the method I used sometime, but basically I squeezed the A and B channels in by 10% on the low and high sides while doing a slight “S” curve on the Lightness channel to help the contrast. Squeezing the A & B channels (as I've termed it) basically increases the saturation without creating the same artifacts you get from increasing the saturation directly — like color noise and color clipping. After this, I considered sharpening as long as I was in LAB mode, but it didn't look that great on the water so I left it out. Converted back to RGB and saved a final copy. I have to mention, I also saved a copy of the PSD file before I converted to LAB and before I converted back to RGB. When you convert, you have to flatten and you lose all your non-destructive editing. It's a good idea to keep your editing history at hand. 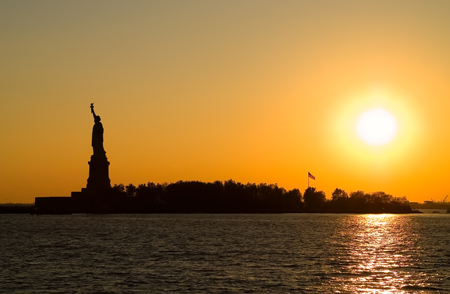