Depth of field (DOF) is one of the most important factors in determining the look and feel of a photograph. It's also the most overlooked for photographers moving from a point-and-shoot camera to a digital SLR camera. The dSLR (and most of the ultra-zooms) offers huge amounts of control over depth of field, and you should know how to utilize that control.

There are four main factors that control depth of field: 1) lens aperture, 2) lens focal length, 3) subject distance, and 4) film or sensor size. Your film or sensor is pretty well set, so you won't have much luck changing that. Your focal length and distance to the subject are usually determined by your choice of composition. So the lens aperture is your primary control over depth of field.

Before I get to the tips, let's get a few things straight:

So there are your basic tips for controlling your depth of field when taking photographs. The best way to learn how to control DOF is to set your camera to aperture priority mode (if it has it) and go take some pictures. Photograph the same subject many different times while altering the aperture, point of focus, and focal length (if you have multiple lenses or a zoom lens). Either write down your settings you used for each picture or use software to view your camera's settings while you look through the pictures on your computer. You'll begin to see how these different things affect your photos.

The photo below shows a slightly out of focus background. I took several shots at various apertures, and I decided that I liked having the building out of focus but I wanted it to keep its main features. So the best settings (in my mind) were at a fairly large aperture with a slightly shorter focal length (opposed to 150 or 200mm). In fact, my focal length was determined by the composition and I probably couldn't get a much further away due to the angle I was shooting at. 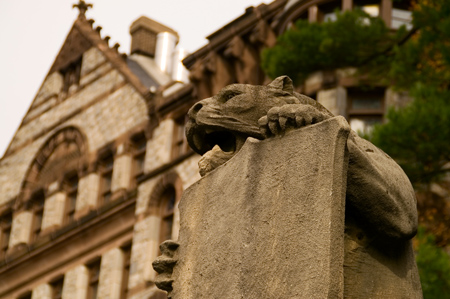