Having a Theme can Make You Better

John Sienkiewicz from Outdoor Photographer magazine posts a tip from the editors called “Have a Theme.”Â  If you have photographer's block or you're less than happy with the direction of your work, John offers some good tips and ideas to get you back on the right track.Â  His main message is to have a theme while you're snapping away.Â  This could be things like colors, shapes, perspectives, objects, etc.Â  For some other ideas, see John's article.

Are Megapixels Worth It?

David Pogue at The New York Times has an article on “Breaking the Myth of Megapixels.”Â  I've heard this argument before, but David actually went out and did an experiment on it — two experiments actually.Â  What he found was that a very small percentage of people could actually determine the difference between a low (5-7 megapixels), medium (8-11megapixels), and high (12+) resolution image printed at the same size (16×24 inches).Â  The moral of his story is that megapixels don't matter… much.Â  There are exceptions and reasons for going bigger, but most consumers don't need the extra megapixels.Â  I shoot with a 6 megapixel dSLR, and when I print to 8×10 (never tried bigger) you can't see any pixelation at any distance from the photo.Â  Good enough for me — for now.

Is It the Camera or the Photographer?

Here's another argument presented by Allen Rockwell at Inside Aperture called “Is it the Camera or the Photographer… or Both?“Â  I think he did a great job at running the experiments and offering his opinions.Â  My opinion: It's definitely both. I've been going through theÂ transformation of upgrading cameras and equipment, and I've noticed big differences in my work at each step along the way.Â  The better equipment allows the photographer greater flexibility, thus expanding the potential to do better work. Â Anybody that has photographed with a P&S and a dSLR will know that there are things you just can't accomplish with a P&S.Â  Just my opinion though. 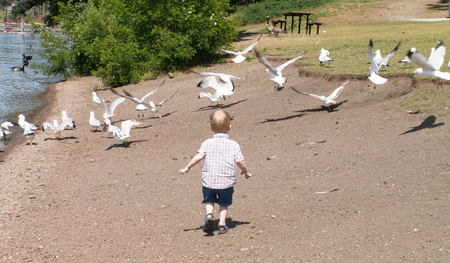